It’s frustrating to watch gold and silver languish when they’re surrounded by major catalysts and since, well, everything else is going up. More than frustrating, it’s bewildering.

But what if I told you gold and silver have been in a near identical scenario before. And that it led to one of their biggest gains in history…

In the mid-1970s, inflation was soaring, unemployment was high, the US was in a recession, an energy crisis had just kicked off, and there were both political and geopolitical issues.

A falling gold price with major catalysts in play that at the time many thought would push it higher. Yet it defied logic and tumbled.

Despite a strong environment for gold, the price was in a relentless downtrend.

Today, we’re also surrounded by numerous gold-positive factors, and yet you can see that the price behavior is very similar.

As you likely know, however, that mid-1970s period, as confusing as it may have been to investors, ended up being only one chapter in gold’s book. And the next chapter, for those that held on, was a whole lotta fun.

What seems clear is that gold was simply coiling, building up more and more pressure, since the catalysts that puzzled investors early on finally blew the lid off the price.

In my view that’s exactly what’s happening now, too. We have a falling price, yet the catalysts are building up more and more pressure, to a point where reality catches up and leads to an explosion in gold.

The current silver price is even more eerily similar to the mid-1970s than gold.

This compares both price periods after their initial crash, as I wanted to zoom in to see if they were behaving similarly—and you can see they indeed are.

Like gold, the silver price was surrounded by factors that most thought would push it up, similar to today, but it remained weak for two years.

And also like gold, the next chapter in silver would prove all doubters and naysayers horribly wrong. The spring under silver was basically coiling, eventually leading to a blow-off top that stunned the investment community and led to a full-blown mania. 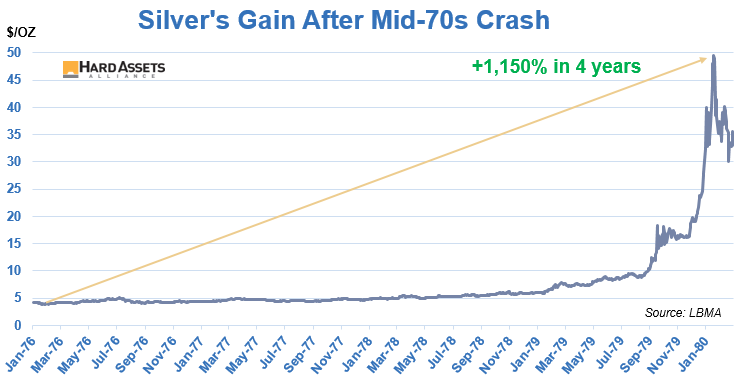 Silver rose over 11-fold, from its low to high, in four years. For the investor who bought near the mid-70s low and sold near the 1980 top, they basically could’ve added a zero to their investment.

Again, this setup sounds awfully similar to what we have today. A falling silver price, surrounded by major catalysts, that are likely doing nothing but tightening the spring under the price, to a point where it’s likely to explode in the near future.

The Spring is Tightening

The message here is clear. Unless there is such a thing as a free lunch, the economic, market and monetary catalysts surrounding gold and silver today are building the pressure under them greater and greater.

Our job is to make sure we’re financially prepared for what is shaping up to be an event that ignites an explosion in gold and silver prices.

Here’s how many investors have been accumulating gold and silver…