Looking at the silver market over the past 50 years reveals some very clear tendencies. Tendencies so strong, in fact, that we can reasonably predict what’s ahead for the price.

Here are five realities about silver that, based on history, point to what’s coming for one of our favorite monetary metals…

Reality #1: Corrections Are Normal—and Our Friend

Most silver investors know the price is volatile—it’s a tiny market so a small amount of capital can have a big impact on the price.

That volatility includes corrections, of course. And putting them to a chart shows that even during bull markets, corrections abound.

This chart logs every correction of 5% or greater since January 2020.

There have been 16 corrections of 5% or more over the past 16 months. And yet look at the gain during this period: 69%.

Even during silver’s biggest run—1979 to January 1980—look how many corrections there were.

In fact, this volatility is why we’ll earn more on silver than gold…

Here are the five major bull markets in gold and silver, including the current one (from each metal’s low last March, through April 21).

It’s something many silver investors know, but it’s worth highlighting to those who might be frustrated at the ongoing lag in price:

With little warning, history shows the silver price can ignite and surge like a rocket.

Those spikes usually aren’t small, though they are typically short-lived. Here’s every silver spike since the mid-1970s—notice how big they have been but also how short they lasted. If we average out all those spikes this is what we find:

On average, when silver spikes, the price rises 150% over a 7-month period.

There’s an important point about how suddenly these spikes occur: you must be invested before they kick in. You might have to wait for it to ignite, but silver’s history over the past 50 years provides a very clear message:

Some investors lament that the price has been stagnant and weak since its peak last August. But this behavior is actually historically normal—and does not mean it won’t explode again in the near future…

Here is silver’s biggest bull market, from 1976 to January 1980, along with our current one (from the low in March 2020). Notice how dormant the silver price was for the first three years of that bull market too, before the mania kicked in… The silver price gained over 1,200% in that bull market, most of which occurred in the final year. Our current bull market so far is exhibiting similar behavior.

Reality #5: It’s Not Just About Price

That’s exactly what silver investors were able to do in January 1980. 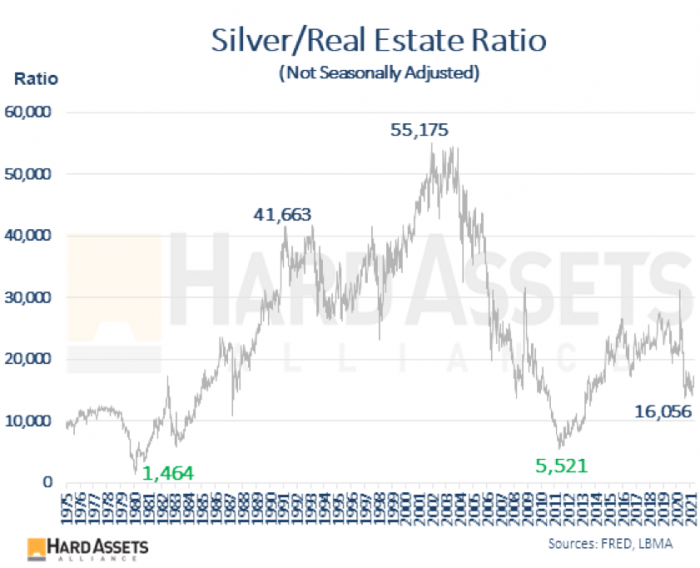 At the peak of the market, silver investors could buy an average-priced home in the US with just 1,464 ounces.

Since silver is money, it’s what you can buy with it that separates this hard asset from most other investments.

There’s another advantage: when ratios like this one reach historic lows—regardless of what the silver price may be at the time—it may be time to consider exiting.

No, I don’t think this ratio bottoms at $85 silver. There’s far too much currency abuse for it to peak at that level. But instead of focusing on the price…

These five realities from history are important for investors to understand. Silver…

Given the nature of silver’s DNA, the message to us investors is very clear:

That’s precisely what I’m doing. And here’s an easy way to do it.