Stocks were up big on Monday, which will have the talking heads saying that everything’s fine again; it’s time to jump back into the market.

My advice is don’t fall for it.

With the Fed’s third rate hike in the rearview, more market downside is inevitable if you look at the historical record. There’s much more to come. Here’s why:

Last week’s hike was the third-consecutive hike. And that’s a very bad sign. It’s when the Fed raises interest rates three times in a row that things tend to get ugly.

The third-consecutive rate hike has a special meaning for the market. It’s an indication the Fed is serious about cooling the economy and withdrawing its easy-money stimulus. As a result, stocks tend to crash.

“Three Steps and a Stumble”

This is known on Wall Street as the “three steps and a stumble” rule. It was discovered by the economist Edson Gould in the 1970s.

He noticed that when the Federal Reserve hiked either interest rates, reserve requirements or margin requirements three times in a row, the stock market tended to roll over and crash.

And according to textbooks written on the subject, this pattern has preceded every single crash in history with only two possible exceptions that could be debated. It might have been a year too early for the 1929 crash and a little too late to call the exact top in 1978.

But this single indicator has a nearly 100% accuracy rating going all the way back to 1919.

The bottom line is practically every time the Fed has tried to raise interest rates, the market has crashed. Investors ignore that reality at their peril.

It’s important to keep in mind that while we may even see some “bear market rallies” like today’s, investors simply must plan on seeing a broader, deeper fall in the market.

Again, don’t be fooled by the mainstream coverage, the “buy the dips” narrative or anyone trying to call a bottom. It’s time to be cautious as this market pattern unfolds.

The Most Tightening in Over 40 Years

At last week’s meeting, Jerome Powell made a forecast of likely interest rate increases for the remainder of 2022. He said investors should expect at least three more hikes of 0.50% and one of 0.25%.

He made it clear that these were the minimum increases to be expected and that actual increases could be 0.75%. In particular, Powell said an increase of 0.75% at the July meeting is definitely a possibility.

Taking Powell’s minimums on top of the current rate would put the fed funds target rate at 3.25–3.50% by year-end. It could easily be 4.0% or higher if two 0.75% increases are included in the mix.

Powell also said the Fed’s reduction in its balance sheet (called quantitative tightening, QT) will continue as previously announced. That tempo is $80 billion per month, or just under $1 trillion per year.

That’s important because that reduction equates to another 1% hike in interest rates in terms of its impact on the economy. Putting that QT on top of the projected rate increases means the effect of monetary tightening will be close to a 5.0% rate increase in 10 months.

Gold: One-Eyed Man in a Kingdom of the Blind

In all, gold rallied 3.8% in one month at a time when stocks were falling, bond prices were in retreat and real estate was showing signs of topping out. If gold was a one-eyed man in a kingdom of the blind, it was not the first time.

The cause of this rally can be captured in one word: inflation.

The immediate reaction to this explanation might be bafflement. The Fed is raising short-term interest rates aggressively and is embarking upon QT.

Intermediate-term rates are also on the rise. The yield to maturity on the 10-year Treasury note rose from 2.75% on May 30 to 3.30% as of today. If that sounds like a modest move, it’s not.

That’s an earthquake in Treasury-note land.

So if short-term rates and intermediate-term rates are both rising steeply, how can it be the case that real interest rates are falling? Again, the answer is inflation.

All of the rates described above are nominal. They’re the actual interest rates you see on your trading screens or hear about on financial TV. They tell you something, but not the whole story.

To calculate real interest rates, you have to start with nominal rates and then subtract inflation. That’s where things get interesting.

The headline year-over-year increase in the consumer price index, CPI, for May was 8.6%, the highest since December 1981.

Inflation takes interest rates through the looking glass. When high inflation rates are subtracted from low nominal rates the result is deeply negative real rates. And that’s an ideal environment for gold.

When one thinks of gold as a monetary asset (as I do), then the price analysis quickly moves to competing forms of money.

Gold has no yield. It’s not supposed to because it’s the purest form of money: a kind always accepted and always in demand, but not issued by a bank or broker. A dollar bill doesn’t offer any yield either. When other forms of money have high real yields, gold struggles except to the extent it is held as a precautionary or safe-haven asset.

So inflation and resulting negative real yields are at least part of the explanation for gold’s recent rally. The final question is whether these conditions will prevail long enough to sustain the rally in gold and possibly result in a new floor on the gold price at or above $1,900 per ounce.

The answer is yes. Inflation may come down a bit in the months ahead, and interest rates will continue their climb (at least at the short end). But even if inflation fell to 6.0% (a tall order), the real short-term rate would still be significantly negative.

And that makes gold, with its real rate of 0.0%, very attractive.

Of course, that’s the benign scenario for the Fed and inflation. Another scenario says inflation could get even more out of control and the Fed could struggle to catch up so that real rates become even more negative than they are today.

In that case, it’s Katie, bar the door for gold prices. The $2,000 per ounce level will be in the rearview mirror.

P.S. You probably know that owning gold protects your money against inflation. But geopolitical uncertainty also creates an ideal environment for gold, as investors look for safe havens.

Meanwhile, governments around the world and large institutional investors are stocking up on gold. That’s why I recommend that you get your hands on some gold if you haven’t already.

When the panic hits, demand will explode and supplies will vanish. Why the Fed Can’t Stop Inflation

The Fed did exactly what the market expected… Why rate hikes won’t extinguish the inflationary fires… Locked into the tractor beam of zero interest rates… Dear Reader, Consensus opinion projected [...] 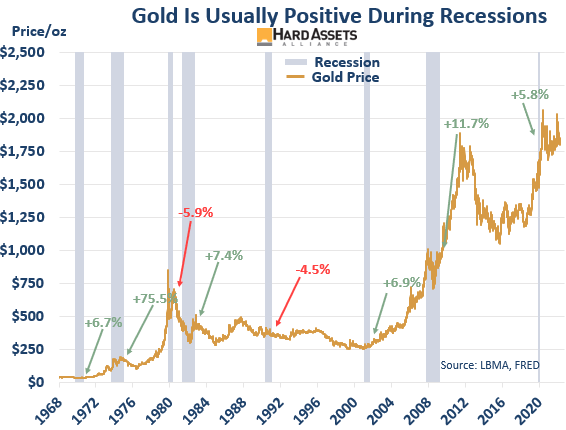 Is Our Money Dying?

As governments increase their debts & unfunded liabilities, servicing them becomes a bigger and bigger problem. That’s especially true if the pile of debt is growing much faster than the underlying [...]