The founder of the world’s biggest hedge fund gave his blessing to the Midas metal.

Ray Dalio of Bridgewater Associates posted an essay on LinkedIn explaining his thinking that “it would be both risk-reducing and return-enhancing to consider adding gold to one’s portfolio.”

Chances are you’ve heard of Ray Dalio and you know he’s a huge success. But you might not have a sense of how huge.

For one thing, while Bridgewater manages $125 billion, it’s been closed to new investors for years.

When it was still open, however, you couldn’t get in unless you had a minimum net worth of $5 billion and you were willing to part with a minimum investment of $100 million.

Bridgewater’s Pure Alpha fund, launched in 1991, generated 21% compounded annual returns (before fees) as of 2014. (That’s how exclusive a club Bridgewater is.)

Not bad for a kid from Queens who got his start in the late ’50s picking up stock tips as a golf caddy.

Dalio’s case for gold comes down to this: We’re more than a decade beyond the Panic of 2008, and the rules of the investing game are changing radically.

That is, he thinks we’re going through a paradigm shift — a term popularized in the ’60s by the physicist and philosopher Thomas Kuhn.

Under the ruling paradigm of the last 10 years, prices of financial assets took off (especially stocks) — growing at a much faster clip than the economy.

That’s about to change.

Dalio believes: “In paradigm shifts, most people get caught overextended doing something overly popular and get really hurt,” he writes. “On the other hand, if you’re astute enough to understand these shifts, you can navigate them well or at least protect yourself against them.”

1) Central banks will run out of stimulant to boost the markets and the economy when the economy is weak.

2) there will be an enormous amount of debt and non-debt liabilities (e.g., pension and health care) that will increasingly be coming due and won’t be able to be funded with assets.

“Said differently, I think that the paradigm that we are in will most likely end when…

b) simultaneously, the large need for money to fund liabilities will contribute to the ‘big squeeze.’

“At that point, there won’t be enough money to meet the needs for it, so there will have to be some combination of large deficits that are monetized, currency depreciations and large tax increases, and these circumstances will likely increase the conflicts between the capitalist haves and the socialist have-nots.”

“Most likely, during this time, holders of debt will receive very low or negative nominal and real returns in currencies that are weakening, which will de facto be a wealth tax.”

In that environment — debt being monetized, currency being depreciated — gold is a safe haven.

Certainly that’s the case relative to other assets like stocks.

“I think these are unlikely to be good real returning investments and that those that will most likely do best will be those that do well when the value of money is being depreciated and domestic and international conflicts are significant, such as gold,” writes Dalio.

That’s the case for gold as “risk-reducing and return-enhancing.”

Coming from a man like Ray Dalio, big-picture pronouncements like these tend to become a self-fulfilling prophecy.

And at a pivotal moment, too, when gold is breaking out of a six-year funk.

Take a look at this gold chart… 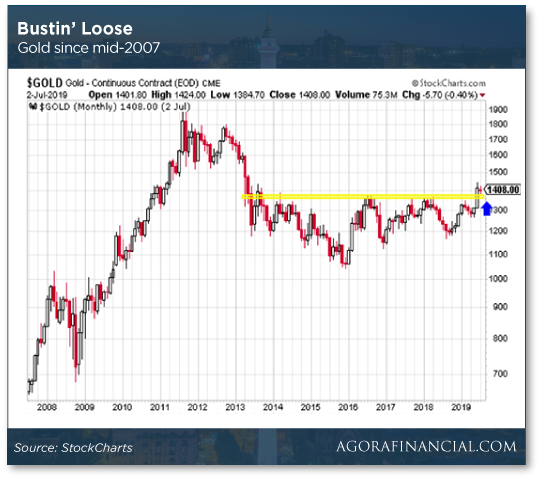 To be clear, Dalio isn’t certain about the timing.

But he’s supremely confident the paradigm shift is coming.