The Case for Gold Is Strong

After an August rally to multiyear highs above $1,566, gold took a breather.

Likewise, silver and mining shares are now in correction territory. But no worries, these pullbacks happen all the time in bull markets — so don’t let this shake your faith.

Much higher prices will come.

In fact, the case for owning gold has never been stronger!

I fully expect gold to reach $5,000 or even $10,000 an ounce over the long run, mainly due to increased global uncertainty, economic slowdown and growing negative interest rates.

Here’s a breakdown of the long-term drivers that will give gold the push it needs to break through this correction to new highs above $2,000 and beyond… 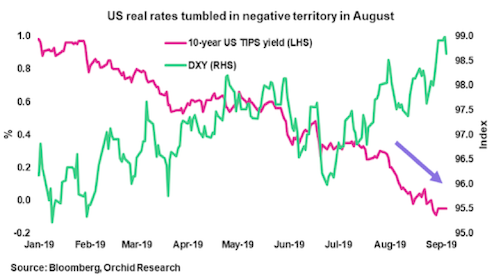 The August rally was driven by a surge in demand for gold, triggered by slumping U.S. interest rates — not to mention NEGATIVE interest rates in Europe and Asia.

This shows growing market fears of an economic recession in the U.S., pushing investors toward safer assets like precious metals.

Plus, There’s the Seasonality Factor

Not only has the price of gold been up for five of the past six months, if history is any guide the fall and winter seasonal patterns for gold should help boost prices much higher.

And I expect 2019 to be no different, given the Fed’s plans to lower interest rates even more and rising U.S.-China trade tensions.

But There’s Another Tail Wind Too

Individual investors aren’t the only ones accumulating gold. The world’s central banks, especially in China and Russia, continue to load up on the yellow metal to diversify away from the U.S. dollar. 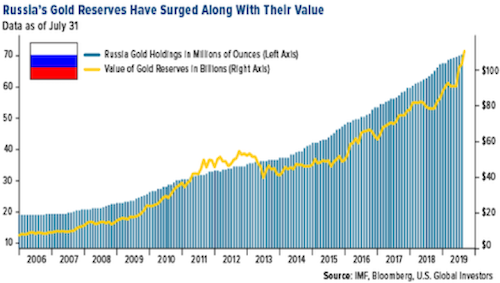 China has also been busy amassing gold stockpiles — the country’s been on a buying spree since the end of 2018, as you can see below: 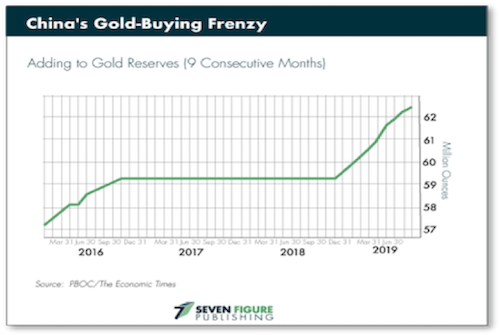 Bloomberg has been tracking the gold buying, reporting:

China has added almost 100 tons of gold to its reserves since it resumed buying in December, with the consistent run of accumulation coming amid a rally in prices and the drag of the trade war with Washington.

The People’s Bank of China (PBOC) upped its bullion holdings by 62.45 million ounces in August, versus 62.26 million the month before, according to the central bank’s data.

After the current pullback, precious metals and mining shares will again surge much higher in the next big upside move, fueled by investors and central banks worldwide wary of negative interest rates.