The typical method used by swindlers, fraudsters and mountebanks worldwide is to coat a tungsten bar or round with gold, add the appropriate markings and — voila! — it’s virtually indistinguishable from the real deal.

[In fact, The 5 reported the story of counterfeit gold in the vaults of the Royal Bank of Canada in November 2017. Again, the “gold” bar and its package were marked with the insignia of the Royal Canadian Mint (RCM). 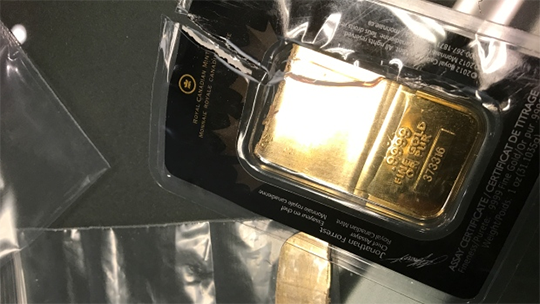 The RCM was appalled, calling the fake a one-off: “Counterfeiting of Royal Canadian Mint products is extremely rare and this is an isolated case,” the bank said at the time.

“There are ways to detect these counterfeits that involve highly precise scales, drilling through the core, magnetic scales, a ‘ping’ test (judging by the sound) and other methods,” says Jim. The downside, however, is gold bullion can be damaged in the process, reducing its resale value.
Jim says: “Now comes a new kind of counterfeit.”

But it’s actually pure gold…
“Gold bars fraudulently stamped with the logos of major refineries are being inserted into the global market to launder smuggled or illegal gold,” says an article at Reuters.

And if you thought tungsten masquerading as gold was difficult to detect, how about mismarked — but real — gold?

“In the last three years,” Reuters says, “bars worth at least $50 million stamped with Swiss refinery logos… have been identified by all four of Switzerland’s leading gold refiners and found in the vaults of JPMorgan Chase & Co., one of the major banks at the heart of the market in bullion.”

In fact, according to Reuters, four gold refinery execs say about 1,000 such standard-size kilobars have been discovered — a tiny fraction of industry output, to be sure, that produces roughly 2–2.5 million kilobars per year. Still, the fakes are highly advanced so thousands more might be in circulation and undetected.

So why forge insignias on real gold?

While you might be familiar with blood diamonds — diamonds mined in global conflict zones and sold for the benefit of narcos, warlords or dictators… the same can be true for gold. Even uglier, these mining operations often use slave labor.

“By pirating Swiss and other major brands, metal that has been mined or processed in places that would not otherwise be legal or acceptable in the West – for example in parts of Africa, Venezuela or North Korea – can be injected into the market, channeling funds to criminals or regimes that are sanctioned.”

And the plot thickens…

“It is not clear who is making the bars found so far, but executives and bankers… think most originate in China, the world’s largest gold producer and importer,” says Reuters.
Once these gold knockoffs are sold to dealers in Hong Kong, Thailand and Japan, they enter the mainstream supply chain.

Speaking of going mainstream, the rumor mill started to churn in 2017 that J.P. Morgan had turned up at least two fake kilobars in its vaults. And get this: The fakes were only identified when it was discovered two bars had matching serial numbers.

The megabank’s declined to comment beyond this: “It’s our standard practice to immediately alert the appropriate authorities and refineries should we discover mismarked gold kilobars during routine checks and procedures.
“Fortunately, we have yet to have an incident resulting in a loss to the firm or a client.”
So there!

Back to China, the Shanghai Gold Exchange — that manages the superpower’s gold market — pleads ignorance when it comes to the manufacture and transport of new gold counterfeits.

In a statement, the regulator says: “The Shanghai Gold Exchange has established a thorough delivery and storage system. The process for gold (material) to enter the warehouse is strictly managed and in compliance with the regulations.”

Jim’s not buying it: “These pure-gold counterfeits are made in refineries in China but are stamped with the name and logo of more prestigious refineries in Switzerland such as PAMP, Argor-Heraeus, Metalor or Valcambi.

“The purpose of such counterfeiting is not to fake the gold,” he continues, “but rather to hide the provenance.
“Major refiners are committed to using gold only from conflict-free zones and not from mines where slave labor or harsh working conditions are found.

“The Chinese refiners don’t care,” says Jim. “They buy gold from the least reputable sources and then try to hide the source by faking the refinery name on the bar.”

Jim’s advice? When it comes to gold bullion: “Restrict your purchases to the actual top refineries or to highly reputable dealers and mints. In all other cases, it’s caveat emptor.”

[Ed. note: In August, rock star fund manager Mark Mobius went on record about gold, saying: “Gold’s long-term prospect is up, up and up… I think you have to be buying at any level, frankly.”]