China and the United States are meeting for trade talks, sparking a major market rally that finally broke the averages out of their collective funk.

Will the two countries kiss and make up? It’s unlikely. But one thing’s for sure: we are all sick and tired of this trade war.

“Escalating U.S.-China trade tensions have been the biggest equity headwind for months, so a relief rally on news high-level trade talks are planned for early October is no surprise,” said Alec Young, managing director of global markets research at FTSE Russell, via Bloomberg. “The bottom line is that stocks need earnings growth to move forward, and you can’t get that without progress on U.S.-China trade.”

The Chinese Ministry of Commerce confirmed the talks will happen sometime in October. Chinese media sources are generally optimistic about the outcome of the talks, according to CNBC. The Dow Jones Industrial Averages was equally enthused, jumping more than 370 points Thursday. A rally of less than 2.5% will place the Dow back at all-time highs.

How badly did the recent volatility spook traders? For an answer, we turn to precious metals…

As stocks ricocheted in a violent range last month, investors turned to precious metals and other safety trades.

I noted in late August how gold and precious metals investments were taking charge as wider price swings afflicted the stock market. In fact, gold flipped the script and began outperforming the S&P 500 on the year as of Aug. 1.

But silver was the real tell.

The poor man’s precious metal finally caught a bid this summer and started to outpace gold — a surefire sign that speculators are finally finding their way back into the precious metals trade.

“Silver is also gaining 4.0% today which is more than twice as much as gold’s 1.3%.” John Murphy noted on his Stockcharts.com blog earlier this week. “That isn’t something new. Although gold led the rush into precious metals during May and June, silver took the lead during July and August.”

Murphy’s chart shows the shift perfectly as silver began to catch a bid back in July: 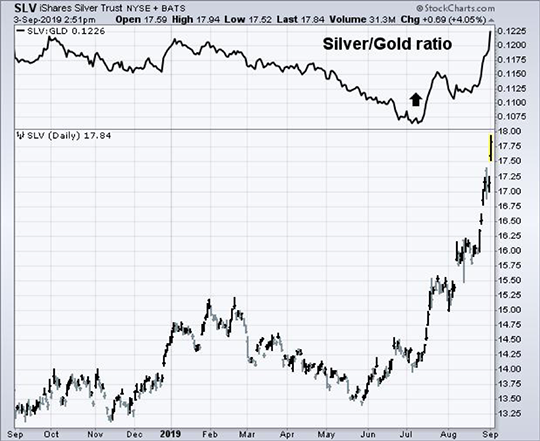 As you’ve probably guessed, the metals trade became a little frothy as trade-war gloom clouded market outlooks. Now that stocks are settling back into a bullish groove, the safety-seekers and metals speculators are taking profits.

We’ll have to watch to see where buyers step back. Remember, major comeback rallies are typically fraught with violent reversals and shakeouts. Judging by the incredible run we’ve witnessed in the precious metals space this year, the current pullback could continue before finding support.