Second: Trump also ratcheted up the trade war pressure on China, announcing more tariffs on Chinese imports to the U.S.

This second factor was especially bullish for gold, because China quickly retaliated for the 10% tariff threat by weakening its own currency value against the buck.

That brought the very real specter of a worldwide currency war out of the shadows and onto front-page headlines.

Trump is right on the money about this.

China has been deliberately devaluing its own currency for many years to boost its exports at the expense of other trading partners, especially the U.S. 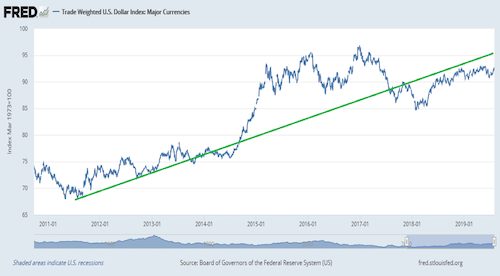 And China is not alone. Every nation on the planet is devaluing their own currency against the buck at breakneck speed:

The euro is down 12% since the start of 2019. Japan’s yen fell 7% before rebounding a bit over the last few months…

The Canadian dollar, British pound, Australian dollar, you name it — they’re all much cheaper against the greenback today compared with just a few years ago.

Every country is playing the currency manipulation game, desperately devaluing their money to gain a competitive economic advantage.

Trump is on to this game, and the next play is to fight fire with fire — devaluing the dollar in order to restore the global currency balance.

This is incredibly bullish for gold, which is exactly why the yellow metal surged higher in August, breaking above $1,500 an ounce in the process!

The truth is the value of ALL global currencies today relies purely on confidence. That’s because currencies are no longer backed by hard assets like gold or silver — paper money is only worth what someone believes it’s worth.

And when that confidence is lost, the value of any paper money is destined to decline. Once people see that a euro, a pound, a yen or a dollar earned today could be worth much less tomorrow, the confidence in paper money as a store of value is lost.

Setting the stage for the new global currency war that’s now unfolding, remember that over the past decade we’ve witnessed the most reckless period of monetary expansion in world history.

Again, it’s not just the Fed’s money printing to blame — although they led the way. It’s also the European Central Bank, the Bank of England, the Bank of Japan, the People’s Bank of China and many other central banks worldwide that have printed money out of thin air over the past decade. 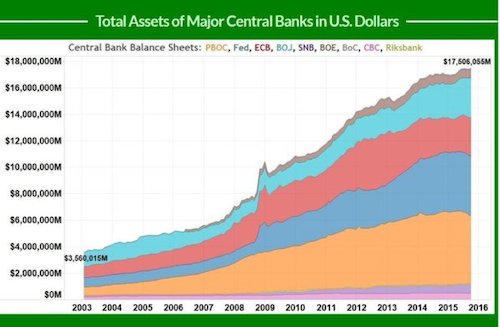 Since the 2008 financial crisis and the Great Recession that followed, central banks worldwide have printed a combined total of $17.5 trillion in paper money, backed by NOTHING but thin air.

Now they are all engaged in a race to the bottom, trying desperately to devalue the bloated paper money supply!

The Fed was in the process of reducing the size of its bloated balance sheet — that is, until last policy meeting.

In a move much more significant than the measly quarter-point rate cut, the Fed also announced they would halt the process of reining in all the cheap money they’ve printed.

That’s what really lit a fire under the price of precious metals and mining stocks — and will continue to push them much higher in value.

You can mark my words, the big gains in gold and mining stocks during the summer were just the opening act in a parabolic move higher for metals and mining shares. It’s just getting started: 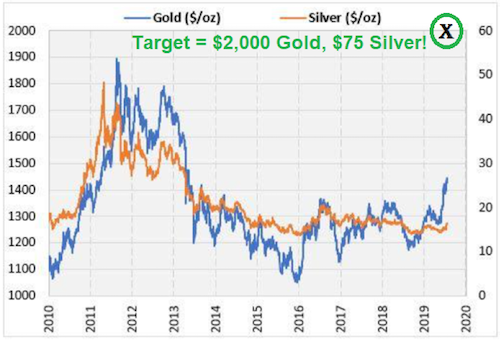 Here’s my expectation: X marks the spot of my upside targets for gold and silver. And I expect gold will soon take out its old highs with ease and surge to $2,000 an ounce or more.

But silver is by far your best bet for big profits.

Silver should soon reach $60 an ounce or more.