When CNN starts flashing a gold chart on the screen every ten minutes, you know the breakout in the gold price has reached the mainstream.

Here’s another chart that indicates a new uptrend in gold is underway, and it’s one you probably haven’t seen elsewhere (and will probably never see on CNN).

I plotted the annual trading range of the gold price since 2013, when most traders say the bear market in precious metals began. I also listed the dollar amount of change between the high and low each year. Notice how the range has shifted higher this year. 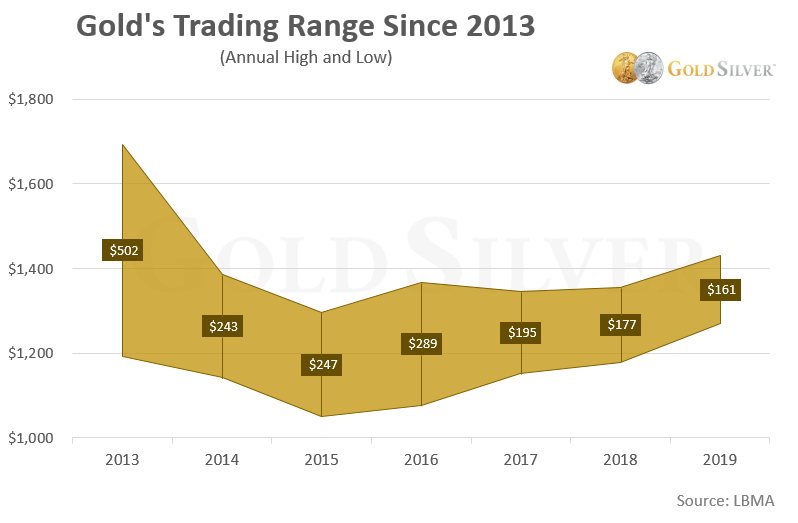 Gold’s price range has moved markedly higher in 2019. And the amount of change in dollars in 2019 is already almost as big as last year’s.

This insight is perhaps more valuable than a simple line on a chart, because it shows that the full trading range — both the highs and lows — has shifted higher.

Gold’s current price surge will undoubtedly take a breather at some point, but this big-picture view represents a decisive shift in momentum, one that could portend higher and higher prices.

This shift has not taken place with silver yet. 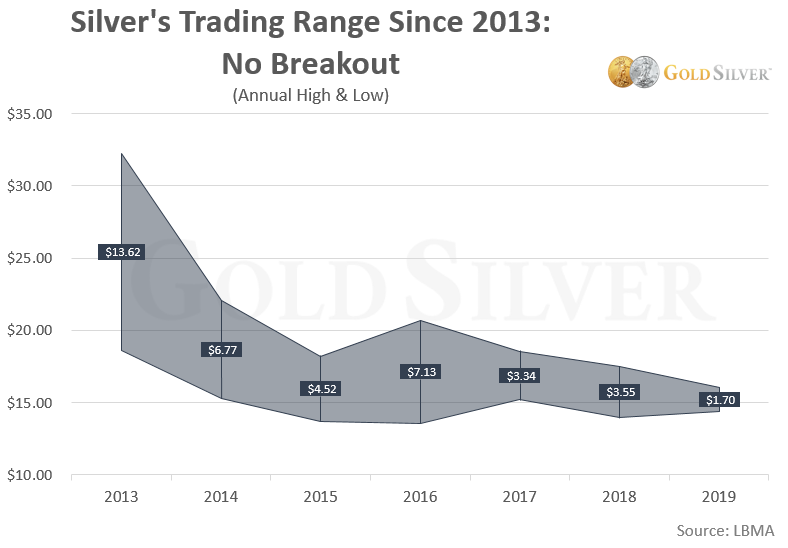 As silver investors know, there is no breakout in prices. In fact, as of the end of June, silver is still below its high of the year for 2019, having hit $16.07 in January.

You’ll also notice that silver’s trading range is very tight so far this year, with prices having fluctuated only $1.70, less than half of last year’s range and only a quarter of the range in 2016.

However, in past bull markets, silver usually trails gold in the beginning stages. So silver’s price behavior is actually normal at this point. Further, volatility in silver remains near record lows, despite the recent bump in the silver price. Combine these two facts and the potential spike in silver could be extreme.

With a breakout in gold underway, we encourage investors to consider if they have the amount of bullion they may want or need. And with a silver breakout possibly to follow, to take advantage of the opportunity before it ends.